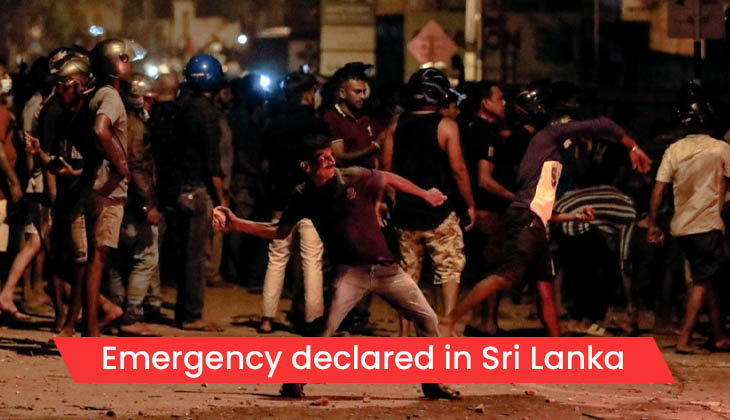 Rajapaksa said the decision was taken in the interests of public security, the protection of public order, and to ensure the maintenance of supplies and essential services.

Violent protests broke out in Colombo over shortages of essential items including fuel and other goods.

Amid the country's worst economic crisis in decades, foreign exchange reserves have fallen by 70% in the past two years and were down to  $2.31 billion as of February 2022, leaving Sri Lanka struggling to import food and fuel.

The situation is such that the electricity regulator of Sri Lanka Janaka Ratnayake has  urged more than a million government employees to work from home to save fuel.

The power cuts on 31 March 2022 were  partly caused by the government's inability to pay $52 million for a 37,000 tonne diesel shipment that was awaiting offloading.

The island nation has been unable to pay for fuel shipments because of a foreign exchange shortage, and the government has announced that it will shortly approach the  International Monetary Fund (IMF) for an emergency loan.

Since Independence Sri Lanka has already approached the IMF 16 times to get emergency loans to tide over its economic problems .

Under its neighbourhood first policy, the Government of India has stepped in to support Sri Lanka. Since January, India has extended $2.4 billion in assistance by way of a currency swap, loan deferment and credit lines for essential imports to help Sri Lanka cope with the  dollar crisis and shortages of essential goods.